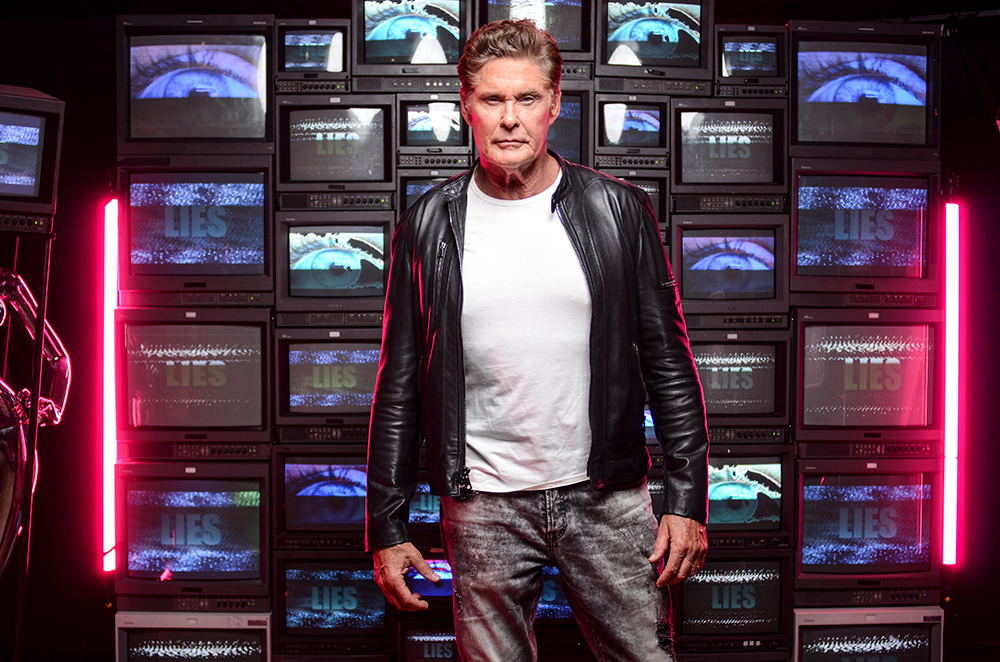 With the help of several unlikely collaborators, he delves into several new wave classics that are equal to and maybe even surpassing the original. The album kicks off with the title track which is a cover of The Lords of the New Church 1982 single. Hasselhoff’s voice soars through the chorus, and the song has the perfect post-punk rhythm due in part to the amazing guitar work from James Williamson, former member of The Stooges. The second track “Head On” is probably my second favorite on the record. Originally written and recorded by The Jesus and Mary Chain in 1989, the track is aided in part by some stellar guitar work from legendary The Cars lead guitarist Elliot Easton. The song has a contemporary feel but doesn’t lose what made the original a classic.

One of my personal favorite pop songs is “I Melt with You” from Modern English. If you’re a fan of ’80s cinema, there’s no way you could possibly not love this song and not have images from Valley Girl running around in your head. Hasselhoff had me fall in love with the song all over again. His version doesn’t stray too much from the original, but with the addition of guitar maestro Steve Stevens, the song plays a bit heavier and delivers a wonderful gut punch. If you’re doing an album that covers some new wave classics, then there’s no way he could ignore Echo and the Bunnymen. Their 1987 single “Lips Like Sugar” is tackled and the results are, once again, near perfection. This track is extra special because the Hoff is accompanied by ’80s legends A Flock of Seagulls. Their song “I Ran” is legendary and their inclusion on this album is a terrific nod to their legacy. Maybe Hoff can cover them on the next one.

When people hear the name ‘David Hasselhoff’, you never know exactly what type of reaction you may get. ’80s children may get excited since many grew up on the series Knight Rider, and his character Michael Knight is a hero to many. Then there’s Baywatch. the super-cheesy, ridiculous action-drama that launched a resurgence for the actor, but not exactly in the way he may have imagined. That series (and, to a lesser degree, spin-off series Baywatch Nights) sort of gave birth to the almost laughable persona some still associate him with. As much of a cheese ball he may be, he’s embraced it, owns it, making him a truly unique media personality who recognizes what he’s seen as and just has fun with it. No other celebrity (maybe William Shatner) is able to do what he does and come out on top every single time. In the late ’80s, he launched a music career and hit number one…in Europe, where he’s a huge draw. His music was a bit silly and laughable to most Americans’ ears, but in 2015 he recorded the single “True Survivor” for the Swedish short film Kung Fury and something magical happened.

“True Survivor” might actually be one of the greatest ’80s action film songs NOT recorded in the ’80s. It’s a perfect example of those killer action movie songs like “Push It to the Limit” from Scarface, “Fight to Survive (Kumite)” from Bloodsport, or “You’re the Best” from The Karate Kid. Keeping with the ’80s theme, Hasselhoff recently released his new album “Open Your Eyes” on Cleopatra Records and does what very few can pull off, re-invents himself and completely slays on every single song. In fact, it’s one of my favorite records of the year.

The hits don’t stop there, either. The next track might be his riskiest. It’s a cover of the David Bowie classic “Heroes.” This song has been covered to death, but he somehow manages to put his own unique spin on it by singing it partially in German. It’s a simple twist but it somehow adds a new layer to it. After contributing to the Guardians of the Galaxy Vol. 2 soundtrack, composer Tyler Bates returns the favor and accompanies Hoff on this one, an interesting collaboration. In my opinion, the only misstep on the record is the Whitesnake cover, “Here I go Again.” Even with Tracii Guns on guitar, I’m not sure Hoff’s voice was a perfect fit for it. It’s good, it just doesn’t hit like the other tracks.

The next couple songs “Jump in My Car” and “Rhinestone Cowby” are a step in the right direction and aided by his collaborations with Todd Rundgren and Charlie Daniels. “If You Could Read My Mind” is a Gordon Lightfoot cover and is turned into a duet with Ava Cherry and it’s a beautiful rendition. The cartoon band The Archies released “Sugar, Sugar” in 1969 and Hoff updates the track and gives it a modern dance feel that really shouldn’t work, but it does. “Mit 66 Jahren” is a German song from singer Udo Jurgens and it’s feels a bit out of place but since it’s The Hoff who has a huge following in that country (and the 30th anniversary of the wall coming down), makes total sense. Covering Neil Diamond is never an easy task but when you’re accompanied by industrial legends Ministry, things get interesting real quick. It has a weird techno vibe that helps to keep you tapping your feet throughout. The album closes with a fitting tribute to Old Blue Eyes by covering “That’s Life.” Sinatra would be proud and after the predominantly post-punk journey we’re taken on, the song brings us back to the present and plants us into our own mortality.

I never thought I would find myself being so compelled to write a review of an album like this, let alone one by David Hasselhoff, but I did and it feels really good. It’s a great record and one I just can’t seem to get enough of. With the exception of a couple weaker tracks, the album manages to capture an era, update it, and is able to fill listeners with this cozy, warm feeling. Hoff has nothing but respect from me and if he decides to tour in support of this album, I will be right there in front. Congratulations, sir! This is one fine album and I truly hope the next one hits as hard as this one.

The new album ‘Open Your Eyes’