By Buck-O-Nine
Available now on: 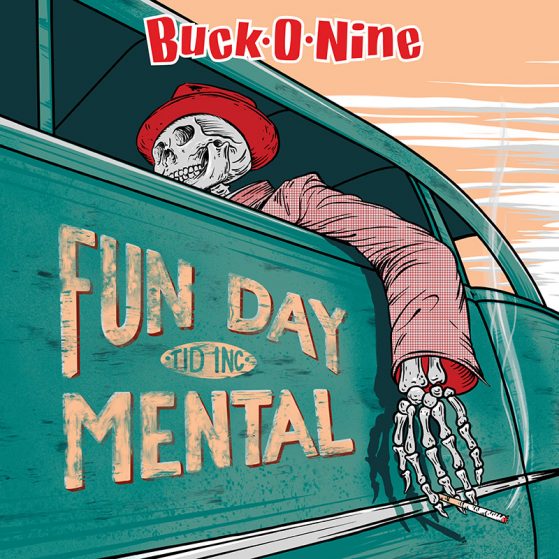 Buck-O-Nine formed in a small warehouse in the early part of 1991. Based in San Diego, the band was on the horizon of a change in the music industry. At the time the catch phrase was “Grunge.” The band was eager to take a different path. With their backgrounds in Punk/Metal bands, Reggae bands and 2nd wave Ska bands, Buck-O-Nine had the formula for what was to become a new mutation of sounds. Inspired by the early founders of this new sound, Buck-O-Nine admired the works of Fishbone, Operation Ivy, The Mighty Mighty Bosstones and the Voodoo Glow Skulls.

By the end of 1992 the band had recorded a demo tape, entitled “Buck Naked.” This was sold at local shows around southern California. The songs on the tape were to become half of the songs recorded on their debut album, “Songs in Key of Bree,” released in 1994. While recording Key of Bree, which was to be self-released, the band caught the ear of their recording engineer, who also owned a small San Diego based label called Immune Records. The band licensed the album to Immune for 2 years. In the meantime they started what would become a relentless touring schedule and continued to write new songs.

After a show in San Diego sometime in the early part of 1995, Curtis Casella, the owner of the Boston based label, Taang Records (at the time home to the Mighty Mighty Bosstones) approached the band. Casella, having just moved his label to San Diego was taken by their choice of cover songs and was interested in releasing them on an EP. In the recording session of what was to become, “Barfly,” the band zipped through the 4 cover songs in an hour with plenty of time in the session for more. They quickly called Casella and agreed to record some new originals. This resulted in the 1995 release of “Barfly.”

With a strong foothold in the new ska scene, Buck-O-Nine toured like crazy across the U.S. and took their first trip to Japan. Soon after the release of “Barfly” local San Diego radio station, 91X, then headed by Mike Halloran, started playing the song, “Water in my Head.” Buck-O-Nine, at the time being involved in a heavy underground scene, was leery of being played on the radio. However, the band felt that its integrity was intact in light of the fact that they had not sacrificed their songwriting technique to accommodate a radio format. So, the band embraced its strange but exciting new success.

Having been added to heavy rotation on 91X, and with the huge support of DJ Mike Halloran, the band caught the interest of some bigger record labels. At a sold out, headlining show at Hollywood’s Roxy theater the band met Tom Sarig, who, at the time, was head of A&R at TVT Records out of New York City. The band found Sarig to be an extremely real and honest person and agreed to fly to New York to meet with the rest of TVT’s staff. After an hour-long meeting with president of the label, the band found TVT to be a fantastic place to help their career grow. They headed to the studio to record “Twenty-Eight Teeth.” The band was pleased that TVT would allow them to continue writing songs they way they wanted.

“Twenty-Eight Teeth” was released in 1997 and spawned their first nationwide radio single, “My Town.” It was a simple little song at the end of the album, about their hometown of San Diego. The single became a nationwide hit and propelled “Twenty-Eight Teeth” to nationwide success. The band continued their touring schedule with the same intensity they always had. As Buck-O-Nine met more and more new fans everyday, these became some of the best of times for the band.

At the end of the “Twenty-Eight Teeth” tour, the band lost its first original member, drummer Steve Bauer. They began work on their next album without a drummer. When it came time to record they used a studio drummer from Philadelphia named Chuck Treece. With a new approach to song writing in the spirit of growing as a band, they released their fourth studio album, “Libido,” in 1999. This record featured a departure from their original sound, and the band was immensely proud of it. While the success of the album equaled the success of “Barfly” it didn’t come close to the success of “Twenty-Eight Teeth.” Times were changing and so was Buck-O-Nine. Soon after the release of “Libido,” the band lost its second original member, Scott Kennerly. Quickly regrouping with new drummer Jeff Hawthorne and Bassist John Bell, originally of Unwritten Law, the band continued to tour through 1999.

After the “Libido” tour, the seven current members of Buck-O-Nine began writing songs for a new album. They went into the same studio where they had recorded “Libido” to cut a live demo tape for TVT. They recorded and mixed 12 songs similar to the style in which “Key of Bree” and “Barfly” were recorded. The songs were more reggae flavored and had an interesting new vibe. Unfortunately, with the changes in the music business and the changes at TVT, the band was dropped from TVT’s roster and this future Buck-O-Nine album was put on hold.

Buck-O-Nine continued their touring regimen through the winter of 1999. After a sold out show at one of the band’s favorite venues, the Fireside Bowl in Chicago, bassist John Bell became critically ill and had to be rushed into surgery to save his life. This sad situation forced the band to abandon the tour and head home. At this point, the band decided to stop touring full time. Buck-O-Nine decided to mellow out for while and enjoy their lives at home in San Diego.

Faced with yet another twist of fate, the band eventually re-grouped after the ill fated tour, playing shows and writing songs. One show they played in Japan was recorded live onto a small mini-disc player for their own enjoyment. After listening to the mini-disc countless times, the band realized they had captured something on tape they had been trying to harness on all of their albums, the energy of their live show. The idea was put in play to maybe release this recording. Singer Jon Pebsworth released “Hellos and Goodbyes,” on his label Offramp Records in 2000.

John Bell, inspired to go back to school after his close call, left the band in the late part of 2000. The band asked longtime friend Andy Platfoot, to become the new bass player of Buck-O-Nine. A sucessful tour in of the UK in 2001 with Andy was a very positive experience that brought the band closer than they had been in a long time.

Between 2002 and 2004, the band wrote close to 20 new songs. Many of them fell by the wayside until 2006. The band got serious about putting together a new album. Three songs that had previously been written survived the cut, and the band relentlessly pumped out another nine original songs throughout the end of 2006. The philosophy was to stick with what the band does best; writing and performing high-energy ska-influenced music combining elements of reggae, punk and rock & roll. Sustain — produced by the Buck-O-Nine with engineer Jeff Forrest in early 2007 and mixed by Jason Livermore (Lagwagon, Descendents) — is the band’s first new studio full-length since 1999’s Libido.

Buck-O-Nine formed in a small warehouse in the early part of 1991. Based in San Diego, the band was on the horizon of a change in the music industry. At the time the catch phrase was “Grunge.” The band was eager to take a different path. With their backgrounds in Punk/Metal bands, Reggae bands and 2nd wave Ska bands, Buck-O-Nine had the formula for what was to become a new mutation of sounds. Inspired by the early founders of this new sound, Buck-O-Nine admired the works of Fishbone, Operation Ivy, The Mighty Mighty Bosstones and the Voodoo Glow Skulls.