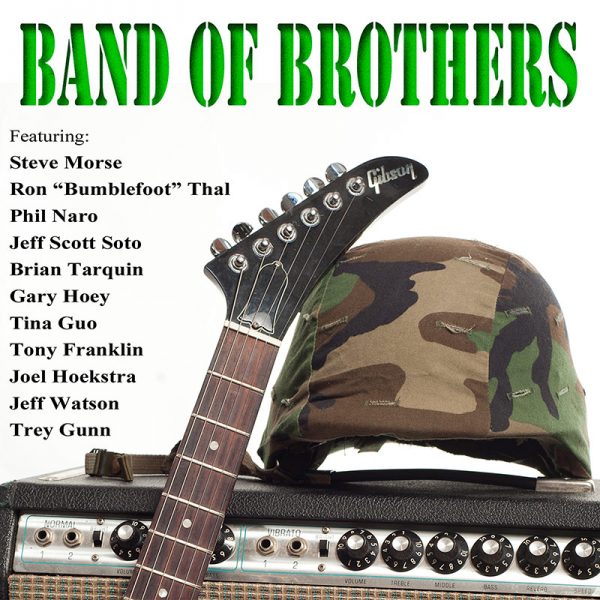 The album features exclusive tracks inspired by those military soldiers who have fought for their country. Partial proceeds from the sales go to the Fisher House Foundation, http://fisherhouse.org who supplies housing to veterans’ families while they are hospitalized. What better way to celebrate July 4th than with superb tribute to our veterans!

Says Brian, ?My dad was a Marine in WW2 so I am very mindful of the sacrifice that men and women under go to keep us free. This is how I can show my appreciation to them through these compositions of music.?

Here’s what the guest artists have to say about ?Band of Brothers?:

?I got involved with Brian because he was making music for good causes. During the process, I discovered that he is a great guy to work with and is very versatile at all parts of this music business. Here’s to the power of music making positive things happen!? – Steve Morse (Deep Purple)

?I’m very happy to be involved with the Band of Brothers project. It is humbling to be included in this cast of musicians and extremely worthy cause.? – Trey Gunn (King Crimson)

?Great rocking tunes, where we all have a chance to shine and stretch. AND for a good cause – it doesn’t get any better than that.? – Tony Franklin (Jimmy Page, Blue Murder)

?I’m so happy to be a part of the Band of Brothers project, Brian Tarquin does a great job putting together the best musicians to help veterans and he’s a killer player himself! Bravo!? – Gary Hoey

?I get to sing, perform, record, tour & EXIST because of my American brothers and sisters who gave their lives up for me…I can?t think of anything I can offer to show my appreciation therefore in song, this is my THANKS to them!? – Jeff Scott Soto (Trans-Siberian Orchestra)

?Song sounds great! Through music, Brian Tarquin shines a light on the immeasurable gratitude and debt we owe to our veterans. Phil Naro is a fantastic singer and adds a whole new height to these songs – proud to be on this album!? – Ron ‘Bumblefoot’ Thal (ex-Guns N’ Roses, Art Of Anarchy)

?I have always believed in the power of collaboration and I firmly believe Brian Tarquin & myself have that perfect songwriting chemistry. The Band of Brothers is abundance of substance & emotions tied in along with great musicianship from all over the world. This Band of Brothers will not remain silent.? – Phil Naro (Talas, Julian Lennon)

?Oh I love how this turned out! It’s an honor to be included on this album with amazing musicians for a great cause!? – Tina Guo (Al Di Meola)

?I was honored and humbled to be asked by Brian to participate on this project. It’s a great lineup, and for such a worthy enterprise. I truly hope it helps further the needed support for our troops and veterans, and also brings attention to the difficulties facing our boys in uniform once they get home. Please support this project!? – Jeff Watson (Night Ranger)

Multi-Emmy Award winning Brian Tarquin is an established top rate composer/guitarist. He has won 3 Emmy’s for ?Outstanding Achievement in Music Direction and Composition for a Drama Series? and has been nominated for an Emmy 6 times. In 2016, Tarquin’s release ?Guitars For Wounded Warriors? was nominated for Best Album by the Independent Music Awards, which showcases Tarquin’s guitar prowess along side such world-class shredders as Steve Morse, Billy Sheehan, Gary Hoey, Ron ‘Bumblefoot’ Thal (ex-Guns N’ Roses), Reb Beach (Whitesnake), Hal Lindes (Dire Straits), Chris Poland (Megadeth) and Chuck Loeb (FourPlay). In 2006 SESAC honored him with the Network Television Performance Award. Tarquin has graced the Top Billboard Charts with such commercial releases as: ?This is Acid Jazz, Vol. 2,? ?Sweet Emotions,? and ?Bossa Brava: Caliente? on Instinct Records, followed by several solo jazz albums, which charted Top 10 at Smooth Jazz Radio. Brian has appeared on 36 releases, selling over 140,000 records in his career.