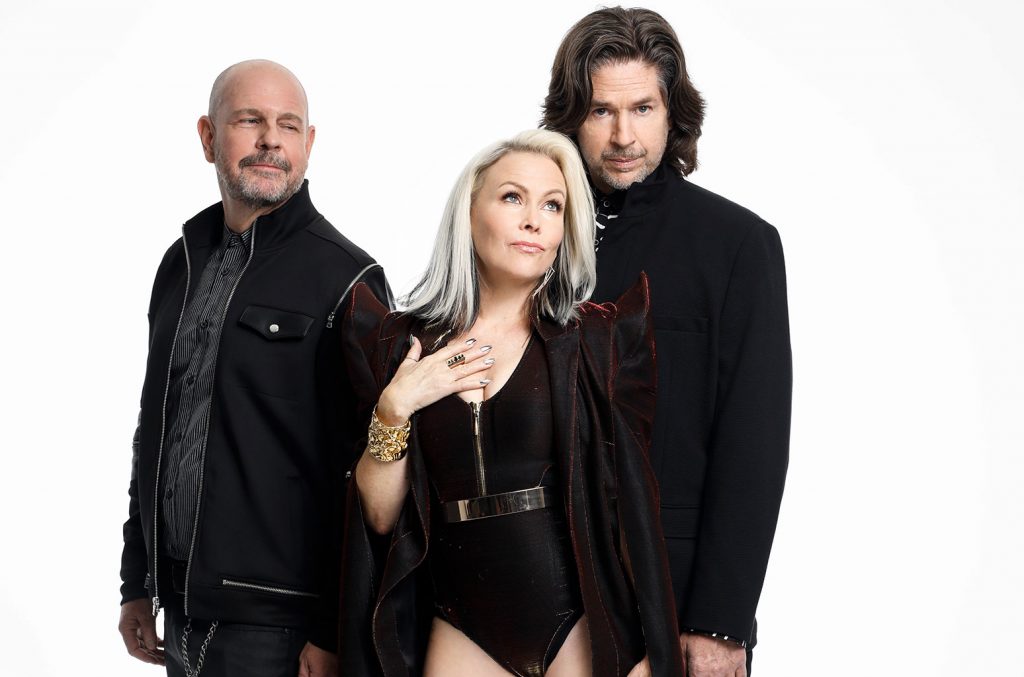 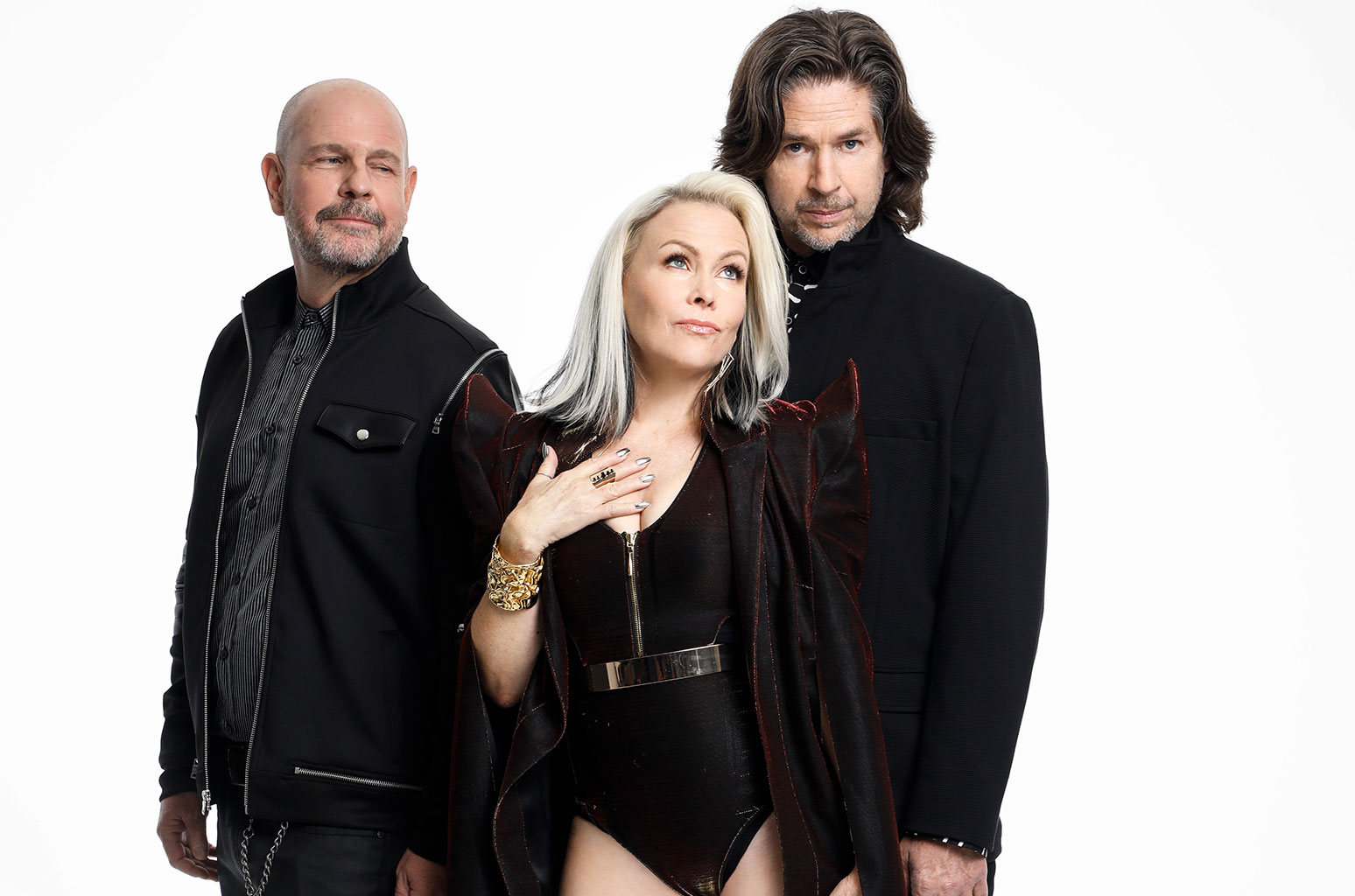 Terri Nunn says a reunion with Berlin co-founders John Crawford and David Diamond is “out of nowhere for me, too.” But on Aug. 2 the trio will release their first Berlin album together since 1984 — Transcendance, whose title track is premiering exclusively below — and hit the road during the summer with the B-52s.

“It’s fantastic, it really is,” says Nunn, who revived Berlin in 1997, a decade after it first broke up. “We are different people. It’s a different connection, a different partnership than we used to be. I’m not scared all the time, like I used to be, and John is a lot more relaxed than he used to be. And David is still a lot of fun; He was always the brat of the group and still is, but he’s also a lot more compassionate. So it’s really great.”

With doors of communication opened after Berlin was part of a VH1 Bands Reunited episode in 2004, the group’s current reunion was brought about by personal circumstances — Crawford’s divorce and Diamond’s split with a partner. “It was just an upheaval for both of them and we reached out to each other and it was really a reconnection,” Nunn says. “And in the process of that we got creative, as we always were ’cause that’s what we do when we’re together. And things started to pop.” After some initial sessions faltered, the trio was introduced to award-winning Australian producers Andy and Thom Mak, who brought Transcendance — which resumes Berlin’s particular brand of synth-pop, including a remake of the troupe’s provocative 1983 single “Sex (I’m A…)” — to fruition.

“I guess for me it’s proving to myself I can still make great music that’s relevant to me and that says something,” Nunn notes. “It needed to have a message. A lot of EDM and electronic music that is happening now is sonically great, but it’s not saying a whole lot…and I felt I could add to that, especially for people who aren’t 20 years old and just want to have sex in the backseat of a car and go to the dance club. That’s fine for kids but not for me. It doesn’t speak to me at all. There is more to talk about at my age and people that are around the age that we are, and this album has a lot of different topics on it.”

Chief among those is Transcendance’s title track, which was inspired by conversations Nunn had with her mother, who died in 2007, and with one of her mother’s close friends before her own death last year.

“My mom and I were really close,” Nunn says, “and (the song) is about what she described to me, what it was feeling like to let go, to die. The last thing my mom said to me was, ‘Terri, I’m going to miss you and the people I love, that’s the sadness, but this is not sad. This is cool. This is amazing.’ And right around the time we started this album, a year and a half ago, her friend Judy Taylor called and she said exactly the same things as my mother had told me; She said, ‘Terri, this is probably the greatest adventure I’m ever going to have, and I’m kind of excited about it.’

“And I was like, ‘Whoa! I want to feel like that!’ We are all going to have it, so does it have to be bad? No, maybe it isn’t. I hung up the phone with Judy and was absolutely inspired and wrote the lyrics in 20 minutes.”

Redoing “Sex (I’m A…),” a duet with Crawford, as well as other songs such as the album-opening “I Want You,” allowed Nunn to plant a flag “about a new experience of sexuality in my life right now, and how it’s different. I didn’t know what to expect to be older and what sex is going to be like now; It’s different, and there’s a lot of things it isn’t that it was in my twenties, but there’s a lot of things it is that it wasn’t in my twenties, too. There’s some really cool changes. There’s no more neediness in it anymore — it’s just fun, pleasure, enjoyable. It doesn’t need to be any more than that anymore.”

With age, meanwhile, don’t expect Nunn to be jumping on Crawford and having him carry her off stage when they perform the song. “There was a point where John had said he would never sing ‘Sex’ with me, because he was very religious at that point,” Nunn recalls. “He just slowly got himself back into it. What’s great for me is that we wrote the song together, so to get to sing it with him again is so amazing for me.”

Transcendance, which is being released by Cleopatra Records, also coincides with the 40th anniversary of Berlin’s formation in Los Angeles, though it would be a few years before the group broke through with his such as “The Metro” and “No More Words” — and, of course, hitting chart-topping and Academy Award-winning heights after Diamond’s departure with “Take My Breath Away” from the 1986 film Top Gun. But Nunn says she’s happy the group is marking the time with new material.

“It doesn’t feel like 40 years, ” she says. “I had no idea we’d get to play this long. It’s kind of like a marriage; You hope it will be forever, but you don’t know. I’m just proud of what we did — and what we’re doing.” She also predicts that working with Crawford and Diamond will be a going concern for Berlin.

“John just said the other day that if I want to do this through my seventies, he’s there,” says Nunn, 57. “It’s wonderful to hear that from him. He was born to be a writer, and he has so many songs; Even when we finished this album, he said, ‘I have 40 more. When are we going to do the next one?’ We’ll see if people respond to this. I hope they do, because we’re not just doing it for ourselves, you know. We’re not a garage band. We want people to respond and actually contribute something.”