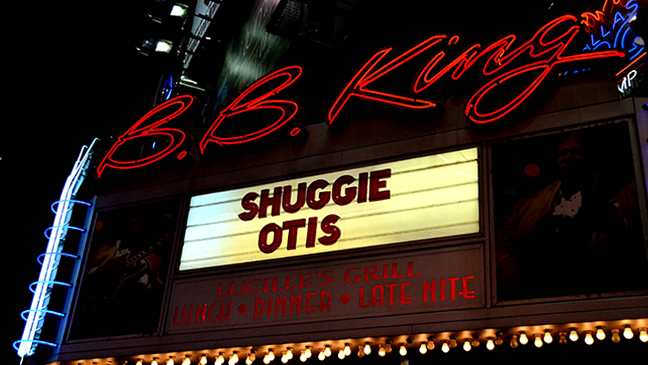 For some music connoisseurs, guitarist/singer Shuggie Otis is the living avatar of psychedelic soul — filling a void left by the passing of Jimi Hendrix and Buddy Miles and the long-lamented decline of Sly Stone. It’s been decades since Otis’ own artistic peak — the 1974 album Inspiration Information — and his popularity never really matched the critical acclaim he’s garnered. Yet, there was Shuggie Otis, looking sharp and playing to a packed house last night at B.B. King’s in midtown Manhattan, taking another trek down the comeback trail in lieu of his classic 1974 LP being reissued along with Wings Of Love, a second disc of previously unissued material, also recorded long ago.

Born in 1953, Shuggie Otis started playing guitar in his father’s rhythm and blues revue before he was even a teenager. His father, noted bandleader Johnny Otis, was quite popular in Los Angeles, discovering talented singers like Etta James and Big Mama Thornton. Young Shuggie became a key member of the Johnny Otis Show, supporting the likes of Charles Brown and Louis Jordan, and was soon lauded by rock artists like Al Kooper and Frank Zappa, as well as blues greats like B.B. King.

A true guitar virtuoso, Otis became something of studio rat in the 70’s and his song “Strawberry Letter #23” became a funk hit for the Brothers Johnson, which was later sampled by everyone from Kanye West to Negativland and OutKast. Shuggie played nearly all of the instruments on his album Inspiration Information — an insular funk-soul masterpiece comparable in context to There’s A Riot Goin’ On by Sly & The Family Stone and Music Of My Mind by Stevie Wonder. David Byrne’s Luaka Bop label reissued that album in 2001 to great acclaim, but the guitarist was already extremely reclusive and elusive, and hadn’t released any new music in nearly 40 years, until now.

Shuggie still boasts those great guitar chops, but he’s an uncertain front-man onstage and his voice has not gotten stronger over the years. Supported by a seven-piece band that includes his brother Nick on drums, his son Eric on second guitar and a horn section, Otis gamely entertained the middle-aged audience at B.B. King’s with a selection of old favorites, blues standards, and extended bursts of shredding psychedelic guitar. His set was practically identical to the one he played the previous night in Chicago, and one imagines he’ll get an even more enthusiastic response at his next gig, the Music Hall Of Williamsburg, where the demographic is sure to be younger.

Although his singing was especially weak on the encore “Strawberry Letter #23,” Otis more than made up for his shortcomings with a lengthy, funkified version of “Ice Cold Daydream” replete with his trademark guitar pyrotechnics. This high profile comeback tour looks to do well for Shuggie Otis, but the real question is what will the man do when the smoke clears? Hopefully, start making new music and gain some new confidence along the way.

In celebration of Shuggie Otis, we have a new Shuggie Otis Tour Sweater and T-Shirt! Get Yours Today!