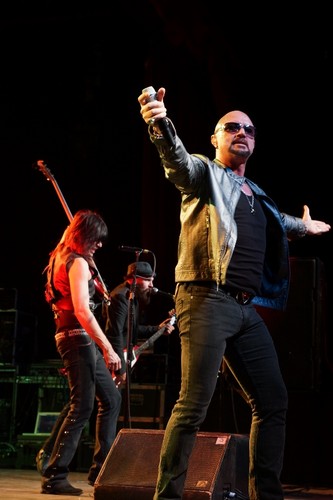 Youre here for the music, remarked Queensrĸches lead singer, Geoff Tate, towards the end of the bands ninety minute set at the Marquee Theatre in Tempe on Sunday night, April 14, 2013. Forget that there is a chasm between Queensrĸche fans as to which of the two touring versions of Queensrĸche is worthy of the name. Forget that past Queensrĸche full length performances of Operation Mindcrime, the 1988 album that brought the attention of the band to the mainstream audience, have usually focused on the theatrical. This night, it was all about the music.

As Tate promised in a recent interview prior to Queensrĸches current tour, the focus on this presentation is going to be on the musicians. Its a concert. Theres a focus that were trying to keep on the actual individual musicians. The mission was accomplished.

With Tate surrounded by some of the best musicians found in the hard rock world, it would have been a crime not to have featured them. Guitarist Kelly Gray and keyboard player Randy Gane (both previously with Queensrĸche), former AC/DC and Dio drummer Simon Wright and the Sarzo brothers, guitarist Robert (Hurricane) and bass player Rudy (Quiet Riot, Ozzy Osbourne, Whitesnake) were more than capable of handling the intricacies of the Queensrĸche material.

Its hard to believe these artists have only been together for a few weeks as their stage presence showed a familiarity with one another that would suggest years of working with each other. Launching into Anarchy-X the Sarzo brothers and Gray quickly moved into the metal band cliché, but still enjoyable to watch, of three guitarists bunched near one other. When not playing off of each other, the three moved around and across the stage, showing the audience that this group was going to be quite animate even before Geoff Tate took the stage.

Upon Tates arrival onstage, the already frenzied crowd shouted their approval and shot up their fists and devil horns into the air as Tate began to sing the lyrics to Revolution Calling. Tate was in fine voice and seemed encouraged by the audiences willingness to shout out the chorus.

With the band performing Operation Mindcrime in its entirety, there was little break between songs. Despite Tates theatrical stage presence which always commands your attention, as the band tore through Operation Mindcrime, and Speak, the tough decision arose, which Sarzo brother do you watch?

Robert Sarzos guitar playing was mesmerizing and Rudy Sarzo showed why his bass playing is legendary. As Tate said later on in the evening, I look over every night and say, damn, thats Rudy Sarzo. For good reason. Sarzo was a monster on the bass, playing it every which way. Yet, despite the pure joy Rudy Sarzo exhibits while playing bass, there were actually times his brother Robert upstaged him on guitar.

It was also nice to get to see Wright showcased. His drum solo that led into Spreading the Disease showed why Wrights talents have been in demand for many years in the hard rock industry.

A highlight of Operation Mindcrime, both the album and the performance, is Suite Sister Mary. No doubt the crowd thought so as well, as Sarzos opening notes brought an appreciative roar from those in attendance. For this tour, Queensrĸche has enlisted the vocal talents of Nina Noir as Sister Mary. Her performance received well deserved praise from the audience. If youre lucky, you can also say hello to her at the merchandise booth prior to or after the show.

With the audience being familiar with the two singles from Operation Mindcrime, I Dont Believe in Love, and Eyes of a Stranger, they loudly sang the choruses of those songs, much to the approval of Tate. The Sarzos, Gray, Wright and Gane brought the Operation Mindcrime portion of the evening to a close with a rousing crescendo that ends Eyes of a Stranger.

After a brief break (there would have been some audience revolution had the set only been 60 minutes long) the band returned with the best sellers from Empire plus one, part of the show. Sarzo strummed the beginning to Silent Lucidity and Tates smooth voice took over, leading to a swaying back and forth of the audience rather than the head bobbing, raised fists that were prevalent most of the evening. But the bobbing and raised fists returned for Best I Can, Im American, Jet City Woman and Empire.

A couple things stood out watching this performance. One, this group of musicians was having a great time performing together. To a man, they all admitted so after the concert. Throughout the show, you could see in Tates eyes the pleasure he was having with the group of musicians that were assembled. As Tate had admitted in discussing his new band mates, I feel really good about this group of people. Everyone seems to be very enthusiastic about the tour and working together. We worked well on the record and found a lot of common ground creatively which is a really big step.

Two, this band would be worth the price of admission no matter what they were called. Theyre already gelling as a band after just a short period of time playing together. Admittedly, for now, theyre more marketable as Queensrĸche featuring Geoff Tate and celebrating the 25th anniversary of “Operation Mindcrime.” But it will be interesting to see what this band can come up with together in the future. Like the audience, the band that played in Tempe on Sunday night was there for the right reason. They were there for the music.

Random thoughts: There was no hiding the tall frame of future Hall of Fame baseball pitcher, Randy Johnson, who was taking photo shots off to the side of the stage as part of his new photography profession. Also kudos to whoever was in charge of the song selection between acts for playing Spooky Tooths Spooky Two album. There may have been several in the fairly older audience who might actually have owned that album at one time.

The NEW Queensryche album ‘Frequency Unknown’ be released April 23rd, 2013. Get your copy!