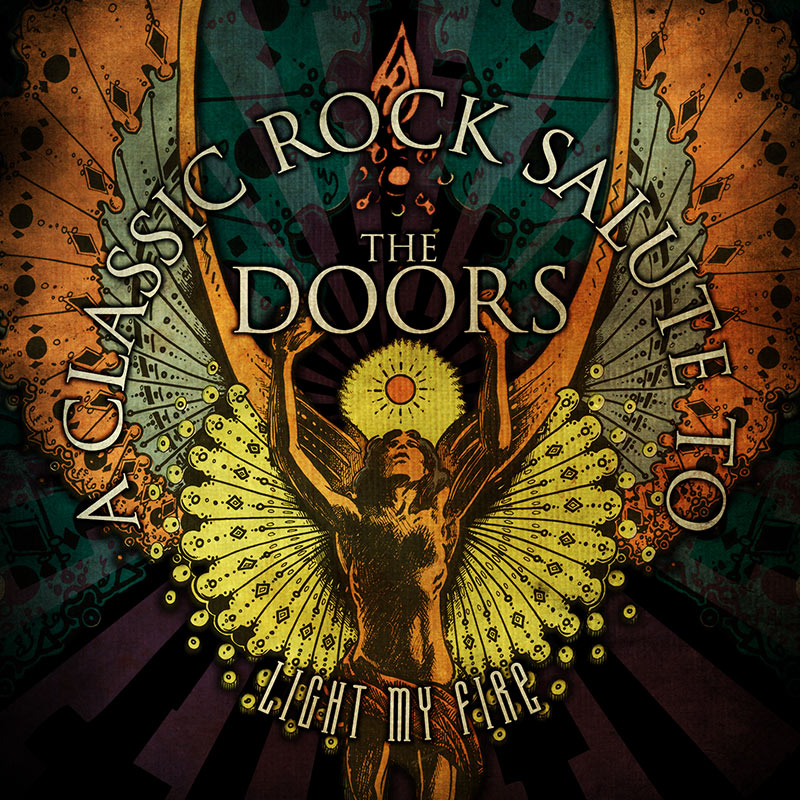 Available for Pre-Order on iTunes!

A star-studded syndicate of rock virtuosos have gathered together to pay tribute to one of the best loved and most influential bands of all-time, THE DOORS, on a new CD release titled “Light My Fire – A Classic Rock Salute To The Doors”, to be released by Purple Pyramid Records on June 24. Produced by the extraordinarily talented Billy Sherwood, the album features brand new interpretations of classic DOORS cuts that defined an entire generation, songs such as “Light My Fire”, “Riders On The Storm”, “Break On Through (To The Other Side)”, “Love Her Madly”, “L.A. Woman”, “People Are Strange” and lots more!

This is a once-in-a-lifetime opportunity to hear some of THE DOORS‘ peers and prodigies tackle these seminal songs. Not one but two members of the quintessential prog rock band YES, keyboard wizard Rick Wakeman and lead guitarist Steve Howe, joined DEEP PURPLE‘s Ian Gillan on the signature song “Light My Fire”, which, as Wakeman explains, “has always been one of those iconic tracks that keyboard players listen to because of the fact that there are so few tracks with keyboard/organ solos on them compared to our six-stringed buddies. It’s also a solo area that is totally open to interpretation so whatever you do is not comparable to the original, so it was an absolute joy to do.” Howe likewise enthuses, “I was delighted to play on this album as THE DOORS were a band I heard a lot as everywhere I went in the late ’60s their music was playing, at friend’s, in restaurants, gigs & bars throughout London. I’m sure I saw them play at Middle Earth, a then-hip club. Then, when the reissue more recently came out, I got totally back into their music, especially ‘Light My Fire’.”

Another keyboard legend, Geoff Downes, likewise extolled the genius of DOORS‘ organist Ray Manzarek, saying, “It was a real privilege to be asked to participate in this project. Ray Manzarek was one of the pioneers of keyboard playing in rock music, and had a major influence on me and many others. His style was totally unique, and an integral element into what made THE DOORS sound the way they did.”

Meanwhile, renegade guitarist Steve Morse, of DIXIE DREGS fame, recollects that THE DOORS were “a soundtrack, literally, for some of the most memorable times, good and bad, that I experienced as a young teen. Like many of my favorites, they were adventurous, improvising, unafraid of what the media might say, and all with a sort of lyrical freedom that still stands up today.” THE CARS‘ lead axeman Elliot Easton proclaims, “I had a wonderful time reinterpreting ‘Spanish Caravan’,” a song Easton found both “challenging and very rewarding!” And jazz fusion Larry Coryell concludes, “THE DOORS were the unofficial representatives to the world for L.A., not ‘Los Angeles,’ but ‘L.A.’ Their sound — raunchy, cluttered, sassy, leering, kind of mean, and always horny was the sound of L.A./Los Angeles itself. How many times circa ’65-66 did my first wife Julie and I drive through L.A. on the freeway listening to, say, ‘Love Me Two Times’, and think that THE DOORS were the sound of L.A. just as clearly as THELONIOUS MONK was the sound of NYC.”

That sound continues to reverberate outward through both space and time, touching each new generation around the globe and keeping THE DOORS‘ flame burning brighter than ever! Producer Billy Sherwood sums it up when he declares, “THE DOORS‘ music will live on forever, and it’s my hope that we’ve paid tribute to the band in the highest way possible.”

“Light My Fire – A Classic Rock Salute To The Doors” track listing: