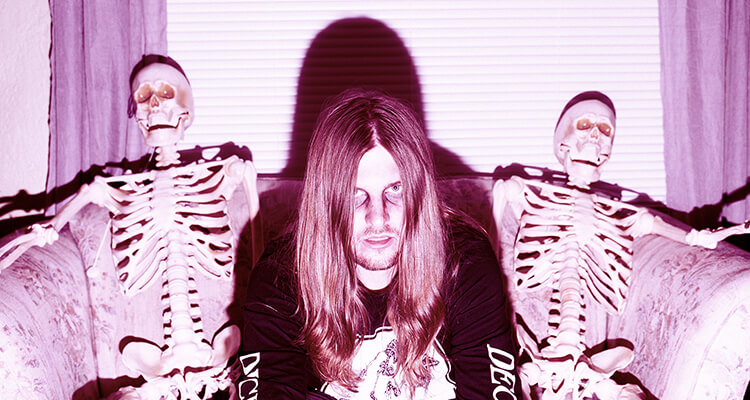 As a member of GGOOLLDD, Nicholas Schubert has helped craft some of the catchiest and most upbeat synth-pop earworms Milwaukee has heard in quite some time. Even though the keyboardist has a knack for building fun, infectious, and poppy songs with his longtime friends and band mates in that accomplished project, Schubert—who says he grew up listening to bands like HIM and New Order—also has a darker artistic side that was fighting to get out. Now that goth rock identity has a landing point in a side project called BLOOD, which will release its debut album Friday, October 31.

That album, Testamental, features 10 songs that find the multi-instrumentalist bounding into divergent and decidedly darker territory than fans of his primary project might expect. An instrumental title track sets the tone, with swelling synths and bleary production. That mood-establishing opening track is followed by “BLOODBATH” and “PINK LIGHTS”—each of which offer grandiose instrumentation reminiscent of a Goblin score and reverb-drenched utilitarian vocals from Schubert. Over the course of the self-produced (except for two songs produced by Casey Soyk) and self-recorded record, Testamental dips into “dark wave” expanses, with compositions like the driving and aptly-named “GO,” as well as the guitar-laden “CAN’T SEE IT,” and the flourishing frenzy employed in the ultra-infectious “DESTROY.”

While much of the record lives in the shadows, there are a parts of Schubert’s excellent departure that are touched by the light. “NOTHING”—with its delicate melody and touching lyrics—is a surprisingly sweet standout song for a project that’s called BLOOD, and “WAIT” is a song that’s smooth and vibrant enough to earn a spot on future GGOOLLDD setlists without any risk of audience alienation. Though BLOOD’s impressive debut is certainly a suitable soundtrack for Halloween weekend, it’s also well-orchestrated mood music for all seasons. Before it’s released digitally by Los Angeles label Cleopatra Records this Friday, you can listen to Testamental in its entirety below.