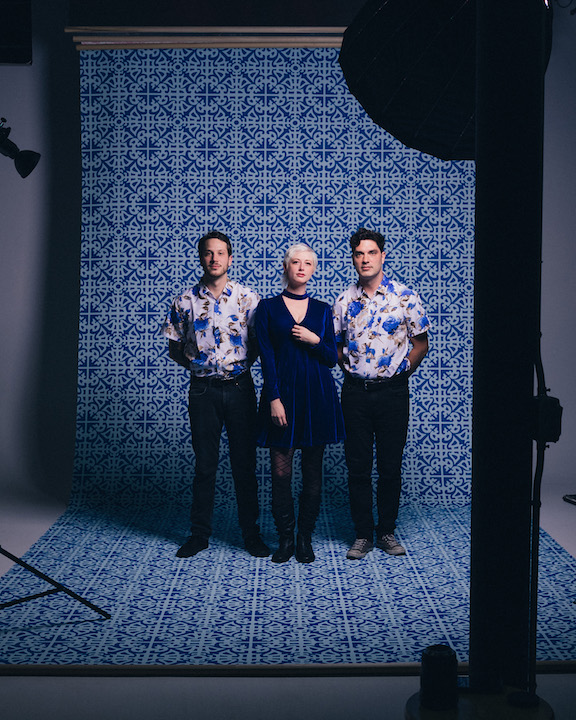 Out of the many Jersey bands makin’ waves, Dentist seem to be surfing some of the largest. With a couple of national and several regional tours under the Asbury Park-based indie trio’s collective belt, as well as three stellar LPs and plenty of fun and inventive videos since 2014, Dentist are one of the hardest-working acts in the Dirty Jerz and, therefore, one of the most in-demand for bills that need a good draw. I spoke with the trio—the co-founding husband-and-wife team of guitarist Justin and vocalist-bassist Emily Bornemann (who were in another award-winning indie-rock band together called No Wine for Kittens) and their rock-steady drummer Matt Hockenjos (once the mastermind behind the reggae-rock act Overmind)–about their 2019 accomplishments, as well as a few plans that they could share gazing into a rock ‘n’ roll crystal ball. Those include shows on Dec. 14 at Baby’s Alright in Brooklyn with Honduras and The Zings, and New Year’s Eve at The Saint in their hometown. If you’ve been living under a rock and haven’t done so yet, definitely check out Dentist live, as well as at https://www.dentistband.com. And enjoy the following interview, mainly with Justin, but with Emily and Matt occasionally chiming in.

The same thing happens to us whenever we see a sign that just says “dentist.” Hopefully this happens to a lot of people that know us, but it wasn’t intentional. Maybe we’ll start telling people it was, so we seem smarter than we are.

So what did inspire the name?

When we first started the band, it was only a recording project, and we weren’t taking it that seriously yet. The name was just something we found amusing at the time and didn’t come from anywhere in particular.

What were Dentist’s greatest accomplishments of 2019?

Our biggest accomplishment was probably going on tour with Brick + Mortar. This was our first time opening for a bigger act on a long tour, so we had the opportunity to play in front of a lot of new
people all over the country. For this tour, we got sponsored by Taco Bell as part of their Feed the Beat program and were also featured on Taco Bell’s Instagram story. In addition to that, we opened up for some bands that we are huge fans of, like A Giant Dog and White Reaper. We also had another year at SXSW as official artists, and we managed to record and write a new song with an accompanying video.

Dentist return with their latest album of infectious indie-pop!

Named one of the top 10 bands at this year’s SXSW by Mercury News and a darling of critics at NPR, Stereogum, Flood Magazine and more, Dentist are primed to explode in popularity with this their third and strongest album to date!

The band tours consistently and has shared the stage with Laura Stevenson, Television, Screaming Females, Ringo Deathstarr and more!