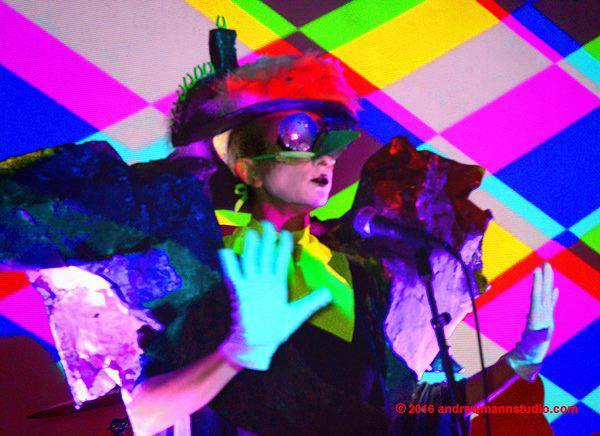 Renowned multi-media performance artist Rachel Mason has unveiled her latest single, and video for, “Tigers in the Dark”. The song appears on her upcoming album Das Ram and the video was directed by Matthew Spiegelman.

Mason created the Das Ram song cycle with her long-time creative partner Jeff Hassay, who co-wrote, recorded, mixed, and produced the album in his music studio in Los Feliz, California. “Tigers in the Dark” was written from the perspective of a hybrid entity, part human and part other animal, where Shakespeare’s line about “All the world’s a stage…” is flipped on its head. This hybrid being views the stage setting as ‘real life’, whereas reality is a fictional realm. The creative identity exists and begets art on the stage.

Mason channels the mind-set of the divided creature who is locked in the cage of real life, but who, when unleashed, becomes a creative force once (s)he hits the floorboards. Mason’s lyrics on “Tigers in the Dark” are a tribute to, and acknowledgement of, the life of the artist and an altogether fitting entryway into Mason’s wondrously creative world.

Mason recently mounted a theatrical exhibition at the LTD Los Angeles to inaugurate the imminent release of Das Ram. The video for “Tigers in the Dark” was featured, along with artist Dennis Hoekstra’s installation of a replica of the 1970s glam rock nightclub English Disco. Rodney Bingenheimer, AKA KROQ radio’s “Rodney on the Roq”, spun a DJ set at the event.

In scripts, sculpture, rock operas, performances and songs spanning over a decade, Mason has created imagined worlds where animals, objects, mythological creatures and all forms of non-human entities have taken shape through her body and voice. Her shows wrap the audience in fantastical narratives which interweave musical, theatrical and narrative elements into unexpected operatic journeys.

Hailing from Los Angeles, Rachel recently returning home after spending the last 10 years in New York City. There, she represented as an active element on the city’s arts scene a visual artist, songwriter and performer.

Rachel Mason has recorded 13 full-length albums and three operas, including her most recent unique rock opera feature film The Lives of Hamilton Fish, which toured the world in 2015 and was released this month on VOD.