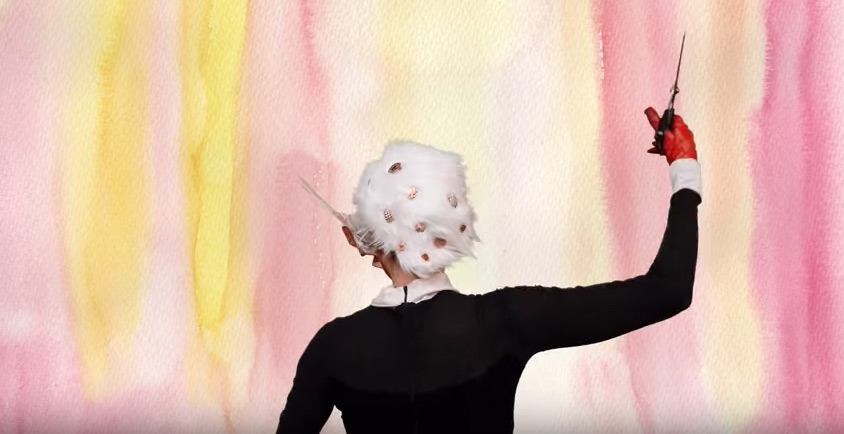 “More than a touch of Siouxie Sioux or Karen O’s drama in her expressive vocals, supported by electronic pop sonics” - The Big Takeover Magazine

“One of the most creative forces in the world” - Impose Magazine

“Equally indebted to the Who’s Quadrophenia and the Steve Reich opera The Cave, with video and music interacting in fluid, complex ways” - VICE

“Tempting to draw comparisons to both Kate Bush and Paul Giovanni’s earthy soundtrack for The Wicker Man, but this is all Mason, her persona leaving an indelible impression on the listener”  - PopMatters

Performance artist Rachel Mason presents the video for ‘Roses’, a track from her new album ‘Das Ram’ LP, co-released by Los Angeles-based Cleopatra Records and artist-run cassette label Practical Records present  new album ‘Das Ram‘LP. Comprised of eight tracks, this album conveys the stories of specific characters, who define and delight in their own realities and cosmologies, and individuals who create their own world views, their own religions, and fantasy lives.

‘Das Ram’ is an inversion of the name of renowned healer Ram Dass, and also a play on Mason’s own initials, Rachel Ann Mason. The track “Roses”, produced and co-written by Jeff Hassay, is a powerful anthem with Mason’s crisp sonorous vocals and positively loaded drive.

The ‘Roses’ video was produced and directed by Los Angeles-based artist team BeckandCol. They also contribute costumes and choreography, while Mason created the masks, one of the hallmark features of her live shows. In their work, BeckandCol use humor and chaos to investigate the crisis of human exceptionalism.  “Their work explores alternate universes populated with monsters, who obsess over humanity and emulate its dominant attributes,” says Rachel Mason. “Their monsters resist any classification built on hierarchy or a merely binary opposition and instead exposes hierarchical behaviors as absurdities, forcing a rethinking of social and cultural norms.”

Mason met BeckandCol after one of her L.A. concerts, impressed with her  performance, elaborate costumes and dancers. They became mutual admireres and began working together on live performances. They are currently involved in Mason’s new project, which is being pursued as part of her residency at Los Angeles’ world-renowned Hammer Museum.

The new video follows those for ‘Heart Explodes’, which was initially shown at a festival for new video works by women artists at Red Bull Studios NYC and ‘Tigers in the Dark’, which first screened at the LTD Los Angeles gallery.

Touted as “one of the most creative forces in the world” by Impose Magazine, Mason is best known in music circles for delivering fantastical narratives which interweave musical, theatrical and narrative elements into unexpected operatic journeys. Through her wide-ranging portfolio of mixed media work, she instigates fantasy and harsh realities through scripts, sculpture, rock operas, live performances and compositions that span over a decade.

She has recorded 13 albums and created many music videos. Her feature film The Lives of Hamilton Fish toured the world in 2015 and recently released on VOD. Mason has exhibited her visual art and performance work at museums, film and performance festivals internationally and at many of the country’s leading art galleries. Her work has received praise in VICE, Interview Magazine, The New York Times, Artforum, LA Weekly, The New Yorker, The Los Angeles Times, Art in America, and Flash Art.

Keep up with Rachel Mason