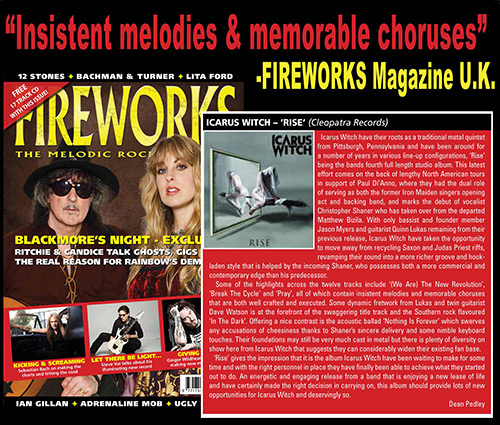 Icarus Witch have their roots as a traditional metal quintet from Pittsburgh, Pennsylvania and has been around for a number of years in various line-up configurations, ‘Rise’ being the bands fourth full length studio album. This latest effort comes on the back of length North American tours in support of Paul Di’Anno, where they had the dual role of serving as both the former Iron Maiden singers opening act and backing band, and marks the debut of vocalist Christopher Shaner who has taken over from the departed Matthew Bizila. With only bassist and founding member Jason Myers and guitarist Quinn Lukas remaining from their previous release, Icarus Witch have taken the opportunity to move away from recycling Saxon and Judas Priest riffs, revamping their sound into a more richer groove and hookladen style that is helped by the incoming Shaner, who possesses both a more commercial and contemporary edge than his predecessor.

Some of the highlights across the twelve tracks include ‘(We Are) The New Revolution’, ‘Break The Cycle’ and ‘Pray’, all of which contain insistent melodies and memorable choruses that are both well crafted and executed. Some dynamic fretwork from Lukas and twin guitarist Dave Watson is at the forefront of the swaggering title track and the Southern rock flavoured ‘In The Dark’. Offering a nice contrast is the acoustic ballad ‘Nothing Is Forever’ which swerves any accusations of cheesiness thanks to Shaner’s sincere delivery and some nimble keyboard touches. Their foundations may still be very much cast in metal but there is plenty of diversity on show here from Icarus Witch that suggests they can considerably widen their existing fan base.

‘Rise’ gives the impression that it is the album Icarus Witch have been waiting to make for some time and with the right personnel in place they have finally been able to achieve what they stared out to do. An energetic and engaging release from a band that is enjoying a new lease of life and have certainly made the right decision in carrying on, this album should provide lots of new opportunities for Icarus Witch and deservingly so.