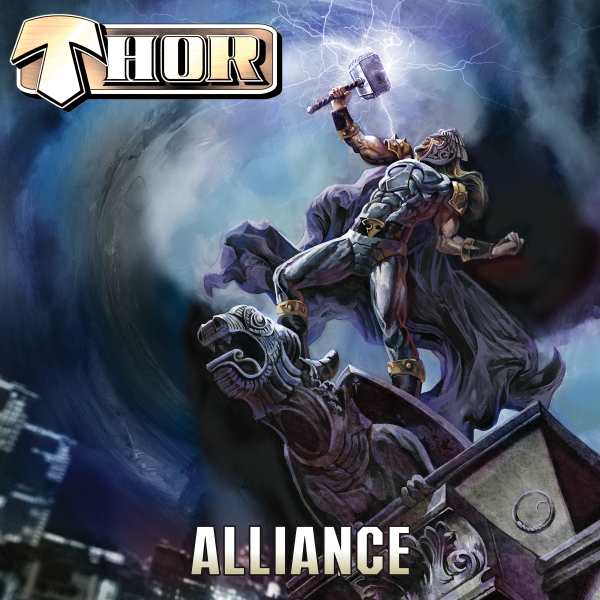 Los Angeles, CA – As a founding member of Swedish metal warriors Soilwork, BjÃ¶rn â€œSpeedâ€ Strid has been a leading figure in the metal world since 1995. Metal deity, THOR, on the other hand, has existed for all eternity, has no beginning nor end, is worshipped by legions of classic metal fans around the world and is about to release a brand-new studio album, his 39th such release, this one entitled Alliance, on July 16! Today, these two mighty giants have united their voices on the epic second single from Alliance, a searing song of sonic devastation, â€œNiflhel (Realm Of The Dead),â€ whose lyrics are filled with references to Norse mythology and the after-life. Trading verses as well as harmonizing with each other on the choruses, these two warriors let the vocal sparks fly as a propulsive track of crunchy distorted guitars and pounding drums does its best to contain the metal fury unleashed therein.

Alliance also includes special guest appearances from W.A.S.P.’s Chris Holmes, Raven vocalist John Gallagher, Danko Jones, Anthrax’s Neil Turbin, Ross â€œThe Bossâ€ Friedman and many more. It features stunning artwork from Timo Wuerz and will be available July 16 on both digital as well as on CD in a digipak and limited-edition silver vinyl in a gatefold jacket! Watch for Thor to launch several shows and festivities in this year as he celebrates this his 39th studio album and an astounding 50 years of metal mayhem as well as co-starring in a feature-length action movie â€œPact Of Vengeance,â€ which will feature music from the new album!