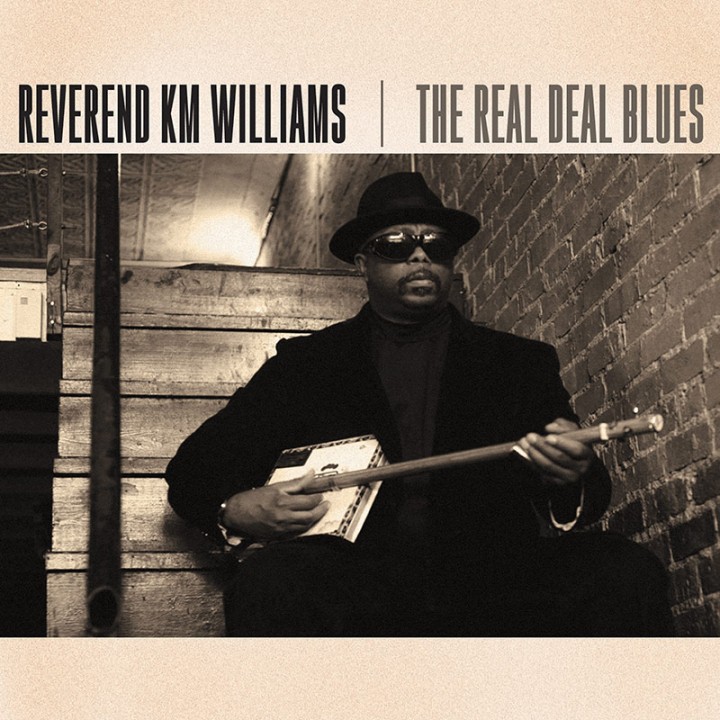 Available on our Store!

The Reverend KM Williams is a true blues genius and a fast rising star in old school Texas Boogie Blues, carrying on the traditions of the great Texas bluesmen such as Lightnin’ Hopkins and Blind Lemon Jefferson. Raised in Red River county of East TX, Williams played his very first guitar licks as a mere toddler sitting in the lap of the great Elmore James. From that auspicious beginning, Williams built his musical chops in church performances steeped in gospel and R&B. Though he plays several kinds of guitar, the most distinctive instrument in his arsenal is an electrified Diddley bow, a fretless one-string instrument that has its origins in African slaves who fashioned a string of bailing wire to a wood plank and a hallowed out gourd, which when played with a bottle produced the familiar sounds of a blues slide guitar. You can hear both the Diddley bow and Williams’s distinctive baritone voice on his newest album, The Real Deal Blues, set to be released on October 14 by Cleopatra Blues. Williams enthusiastically proclaims that this album is “a totally unique blues recording that is both very modern and retro at the same time. This is the most amazing CD I have ever done!”

Williams is also the subject of “The Real Deal Blues,” an extraordinary new short film. Shot by Jay Gillian in the Deep Ellum area of Dallas, a historic blues district where Blind Lemon himself used to busk, this documentary tells Williams’s story while simultaneously telling the story of Texas blues through narration as well as electrifying performances of Williams and his band members, including drummer Washboard Jackson and Blues Music Award-winning harmonicist Deacon Jeff Stone. True to the blues tradition, the stages are modest, sparse, with nary a dance choreographer, Marshal stack or pyrotechnic in sight, yet the performances are no less riveting. This is authentic blues music played with passion and purpose. As Williams himself puts it, “If you want to make money, you need to become a pop musician, not a blues musician. This music is about life and it’s about feeling and about expressing those feelings and having people digging what your doing.”

Watch the “The Real Deal Blues” documentary below!