The Best Rock Show Ever? Johnny Thunders and The Heartbreakers 1977. Fuck Yeah! 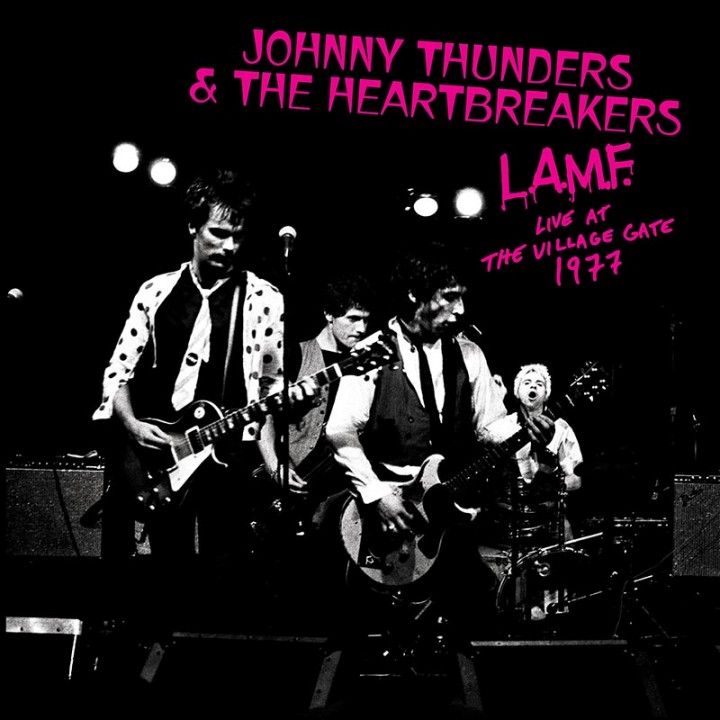 Embedded in my brain are memories that radiate light like shards of luminous crystal. Most of this radiance involves sex, drugs and rock ‘n’ roll. The night I spent with Lester Bangs at The Village Gate in 1977 watching a blazing performance by Johnny Thunders and The Heartbreakers was one of those incandescent nights. Between the music and Lester’s company, it was borderline mythical.

The fact that I remember that night at all is testimony to just how utterly amazing it was. A lot of my past has congealed into the kind of gunk you find inside of an old turntable. But this memory gleams. Drunkenly conversing with Lester was like trying to stand up in a row boat during a hurricane but the force coming off of Thunder’s guitar provided the ballast to keep me from capsizing. The Heartbreakers were stunning.

Thunders was firmly embraced, but still not strangled at that point, by the arms of Morpheus. His guitar riffs strafed the packed house like low-flying aircraft. With Walter Lure doing the heavy lifting and Jerry Nolan and Billy Rath grinding out the kind of transcendent energy that only loud guitars and big ferocious beats can deliver, the band was epic, not to be fucked with, New York to the extreme. No one could touch them. It was without question one the great rock shows I’ve ever experienced. And it’s now available from Cleopatra Records on hot pink vinyl.

Binky Philips was one of the sticks of dynamite that detonated New York City’s punk explosion. He was at the Village Gate for all three nights of The Heartbreakers residency. When Binky talks about those days, it pays to listen:

The Who are my favorite band. Always will be. Having seen them on stage from 1967 on, I know they were the best live band I ever saw. That said, only, yes, only The Who can compare to the three gigs Johnny Thunders’ Heartbreakers performed at the Village Gate on non-trendy Bleecker St in mid-August, 1977.

Okay, I’ve committed that opinion here without having heard the about-to-be-released album recorded at those rightly legendary shows. Here’s hoping I wasn’t on reefer too powerful for my better discernment. I will caveat out front… The Heartbreakers were a very visual band. My band, The Planets, attended all three evenings. We hadn’t seen the guys in many months. Downtown visionary, Leee Black Childers, had just taken control of the band’s destiny a year earlier when he decided to get the hell outta Dodge and hit the far more receptive Brits in London who were currently gaga over the Heartbreakers’ biggest fans, The Sex Pistols.

There’s been a long held myth that when the band landed in England, Leee made them the following proposition; switch from hard-to-obtain-in-London heroin and switch to easy-to-score speed and he, Leee, would supply them endless amounts free. Let me emphasis the word myth. But, it must be noted, The Heartbreakers onstage demeanor during their three “Home to renew our visa and make some money, honey” shows at the Village Gate seemed to confirm the vice-switch rumors. All three nights, all four members of the band were overtly grinding their teeth, twitching, blinking rapidly, Jerry hitting his drums harder and sharper than I’d ever heard him, guitars roaring, Billy slamming his Precision… and playing the entire set nice and fast… Ramones tempo, at least.

Me and my fellow Planets loved Johnny, of course. Hell, I’d met him in early 1969 as John Genzale. But, we all felt that Walter Lure was the secret weapon of the band and overshadowed by JT’s toxic-level charisma. We made our point at all three nights by standing directly under Waldo’s mic stand and screaming “Wal-Tuhhh!” at the top of our lungs after every song. Walter was hilariously uncomfortable and John was amused. After the final show, I went home and wrote a song called “N-O Spells No”. It was a pure homage to Walter’s songs in the Heartbreakers oeuvre. I am thrilled and proud to announce that Walter Lure and I have recorded an album, due out in January, under the name The Last Ditches (Lure came up with that) The album features Walter singing and playing lead on “N-O Spells No”… 38 years later. How ‘bout that! God, I cannot wait to hear this Heartbreakers rekkid!

Brooke DeLarco was at the soundboard for The Heartbreaks three night stand at the Gate. She wrote me in an email:

Terry Ork put the shows on. They were part of a series of shows he did in the summer of ‘77. I had been doing sound for The Feelies and had worked on their record and Richard Lloyd’s for Ork Records. Terry asked me to do the sound for those shows, which is how I met the Heartbreakers. It was the first time I had ever heard them. The Heartbreakers had just come back from England after recording LAMF.  At the sound check I knew right off they were a force to be reckoned with!

The Village Gate was predominately a jazz venue and had a very good sound system. The prior shows in July had been Patti Smith, Richard Hell, Talking Heads, The Feelies, Blondie and everyone else on the scene except for Television and The Ramones. It was also the first bookings for Mars and Teenage Jesus and the nights Terry first uttered the word’s “No Wave” in relation to those bands.

The buzz in town was fever pitched as always at their shows.  All 3 nights were sold out.  3/4 of the way through the first set, they blew the sound system! The amps overloaded and shut down. They played the last song of the set, “One Track Mind” with no vocals. I always wished they had done “Pipeline” but instead they left the stage.

They next night we got the sound straightened out.  The band was tight as ever but slightly slowed down from their initial onslaught the first night! (too much junkie business…lol! ). The last night was rip roaring with Sylvain and Robert Gordon on board for guest appearances. Elvis died that weekend!

Johnny was always the sweetest person to me. I never got any attitude from him or the band for being a girl sound mixer! He called me “young lady” and begged “baby please more monitors”! I was known for getting a great drum sound which Jerry recognized and I was more than happy to give him. Billy was a big advocate for me doing their sound and I continued doing their shows at Max’s until the Live album came out. Walter and I remain friends to this day.

During this period they were all business, the best they ever were in my opinion.

Thanks to Brooke there was someone taping one night of the three. L.A.M.F. – Live at the Village Gate 1977

is sourced from a tape recording off the soundboard. The quality is rough but it captures the energy, vibe and delirium of punk in its early days. It also may be the only document of what some—at least those of us who were there—argue is among the greatest live rock shows ever.

Here’s a video made exclusively for Dangerous Minds featuring one of the tracks off ofL.A.M.F. – Live at the Village Gate 1977

GET OFF THE PHONE from J. Sprig on Vimeo.

Available on CD in a deluxe mini LP gatefold sleeve and on gorgeous opaque pink vinyl!