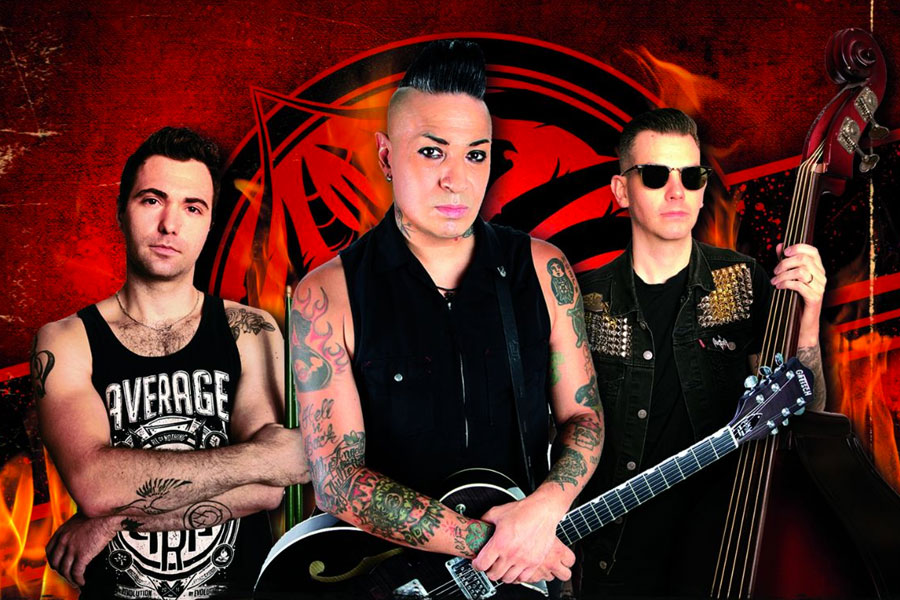 The title track is now available on streaming platforms and a music video will be released in the near future.

CDs and limited-edition red vinyl are currently available for preorder.

The Brains continues its theme of combining retro horror-inspired lyrics with high energy, punk-infused rockabilly in this collection of a dozen new songs plus a superb cover of the ’80s classic “Electric Avenue.” “The album has a lot of satanic references but it’s also about partying, heartbreak, the occult, and more partying,” explains frontman Rene D La Muerte. From The Order of the Solar Temple burning themselves alive trying to reach the afterlife featuring scorching guitar licks by Danny B. Harvey (“Fire”) to the classic toe-tapping road trip sing-along featuring Patricia Day’s sassy vocals (“Hellhounds”) to the title track that tells a story of the protagonist trying to tame a wild and evil woman named “Satana Tarantula” to partying with your girl at some roadside saloon and trying to have a threesome with the hot bartender (“C’mon Let’s Do It All Night”) – The Brains has crafted a flowing psychobilly masterpiece that keeps you hitting repeat after every spin.

The Brains has never been a band to follow the rules. In fact, they’ve made a point of utterly destroying every one of them with each album they release and every show they play. These hardworking road warriors have brought their eye-popping live show to the four corners of the globe. The band has played packed houses throughout Europe, Canada, Mexico and the United States, alongside acts like Rancid, Mad Sin, Nekromantix, The Offspring, The Reverend Horton Heat, and many more. They stand out as a group to watch, by constantly striving to increase proficiency in their craft. It hasn’t been enough for The Brains to earn countless awards and secure number one spots on music television programs; they are now hell-bent on world domination.

Get the Latest Album

The Brains continue their theme of combining retro horror-inspired lyrics with high energy, punk-infused rockabilly on this album of all new songs plus a superb cover of the ’80s classic “Electric Avenue!”