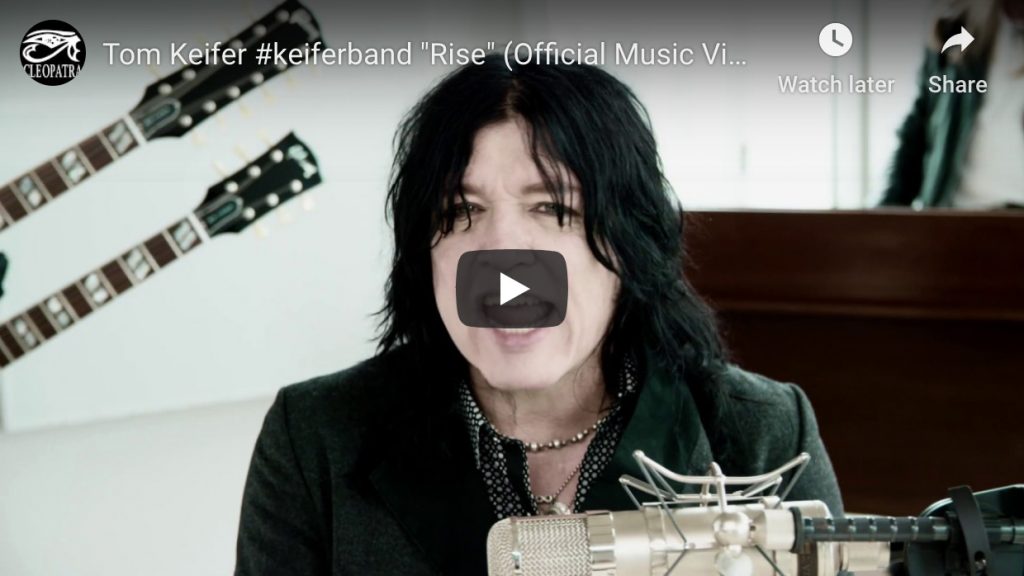 Thompson Square co-wrote the track with the former Cinderella frontman and his wife.

Tom Keifer — who last released new music in 2013, with his debut solo album, The Way Life Goes — calls his latest single, “Rise,” a song that is about “facing life’s challenges head on and overcoming them.”

The rousing gospel-tinged blues-rock track, which he co-wrote with his wife, Savannah, and country duo Thompson Square, is a stripped-down but “uplifting spiritual song … It starts off very broken-down and exposed, with just me and a piano,” says the Nashville-based singer/songwriter.

or the video, Keifer wanted to “keep it simple and let the song speak for itself.” So he relied on a sparse, high-contrast performance clip that highlights his signature vocals and musicianship. Watch below.

On tour, the response to “Rise” has been overwhelmingly positive. “I’ve never had such a strong reaction to an unreleased song before,” he says. “I think it’s because people hear the lyric and connect with it.”

Keifer also observes, “People can relate to it. Life is never going to be without challenges, whether small daily ones or long-term ones that last months or years, and we hope this song inspires people to be able to ride that rollercoaster and overcome the lows and enjoy the highs.”

Keifer is no stranger to challenges, having battled partial vocal cord paralysis for decades. The condition first manifested in 1991, when he was the lead singer of glam-rock band Cinderella, best known for such hits as “Nobody’s Fool” and “Don’t Know What You Got (Till It’s Gone).” He endured subsequent hemorrhages and surgeries, along with years of vocal rehabilitation.

“I was told I’d never sing again,” he says. “There’s no medical treatment for it. The only prayer of regaining my voice was to train it and strengthen the weak side. It was an opera technique that got me back on track, and now my voice is really strong again. The vocal styling [on the new album] is as intense as the early days of Cinderella.”

He formed his own act, #keiferband, after parting ways with Cinderella in 2013. (Cinderella released its last album, Still Climbing, in 1994, but continued to tour.) “The wheels came off of it, and it was time for me to move on,” he explains. “There were issues that existed going back decades that were never resolved, and those things festered. We had a good run though, and now I’m where I want to be.”

#keiferband is releasing sophomore album Rise on Sept. 13 through Cleopatra Records. (The album can be pre-ordered in all formats here.) The seven-member group comprises Keifer, Savannah, guitarist Tom Higbee, bassist Billy Mercer, drummer Jarred Pope, keyboardist Kory Myers and backing vocalist Kendra Chantelle. Much of the album is reminiscent of late Cinderella, and Keifer cites such acts as The Rolling Stones, Led Zeppelin, Humble Pie and Janis Joplin as influences.

“I don’t consider my music metal — and the ‘hair metal’ term is just ridiculous — I like the term ‘hard rock,’ ” he says. “As I teenager, I got into Muddy Waters, Son House and Johnny Winter, and learned the roots and the blues. It always has been a part of my music. So I see myself as a blues-inspired or American roots-inspired hard-rock musician.”

That bluesy sound — and theme of overcoming adversity — peppers Rise. From the very first riff on opening track “Touching the Divine,” Keifer’s influences are apparent, as is his signature high-pitched rasp. The album is a sonically winding road that effortlessly swings between blues and straight-ahead rock, such as the first single, “The Death of Me.” The more experimental track “Breaking Down” shows he isn’t afraid to play around with his sound and vocals. But the title track is the real standout: His voice sounds a little more gravelly than usual, but that only enhances its dramatic appeal.

“I have always written from the heart,” says Keifer, noting that Cinderella fans should find his solo sound easy to digest. “On tour, we play both Cinderella songs and new songs, and they go side by side really well because I was the writer, the lead singer and did most of the guitar work in Cinderella. On this new album, I’m involved in all the writing, I’m the singer, and I play guitar and piano. The stamp of my voice and guitar style is pretty much on anything I perform as an artist. I don’t really have to think about [catering to Cinderella fans]. It’s just there.”

But he makes sure there is plenty of Cinderella material for fans when he performs. “They’re a part of me,” he says. “I love those songs. I was in Cinderella for 30 years, so it’s very important to me.”

Check out TOM KEIFER and #keiferband at any of the following tour stops: