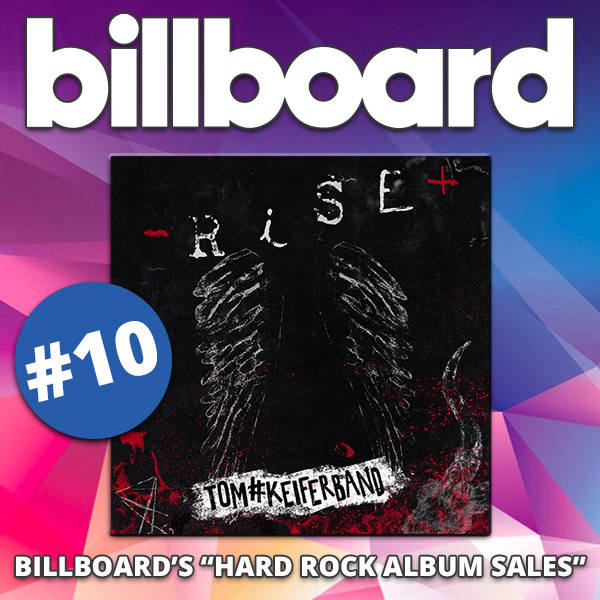 TOM KEIFER’s highly anticipated album RISE with #keiferband–Savannah Keifer, Tony Higbee, Billy Mercer, Kendra Chantelle, Jarred Pope, Kory Myers—has garnered impressive debuts on various Billboard charts thanks to devoted fans who “rose to the occasion” with their ongoing support and devotion to the man who’s been releasing music for over three decades. It was released September 13 on all formats at TomKeifer.com/RiseBuyItNow, including CD (digipak), vinyl (in your choice of red, blue, or green) and digital.

RISE quickly jumped into the Top 40 on Amazon’s “Best Seller” list within hours of its release.

Produced by TOM KEIFER, Savannah Keifer, and Kyle O’Connor, RISE scales renewed sonic heights. From the tasty slide work that stamps “Touching the Divine,” the nontraditionally arranged, heavy, dark jam of “Untitled,” the breakneck thrust of “All Amped Up” to the tender coda of “You Believe in Me,” RISE signifies the ongoing evolution of the former Cinderella frontman as a person, songwriter, and bandleader. It’s the aural portrait of an artist who, to borrow a phrase, is still climbing

RISE was recently praised by KNAC.com as “…a return to form for KEIFER and company. RISE features a cross section of tunes that cull inspiration from NIGHT SONGS and LONG COLD WINTER with a potent, modern age punch that will please diehard and casual fans alike. There’s riffs a plenty, gritty, powerful vocals, and well-crafted ballads, making for a well-balanced listening experience…On RISE KEIFER is showing the kids and his contemporaries how it’s done. Well done KEIFER BAND. 5.0 Out Of 5.0” While Ink19.com hailed, ““In sum, with RISE, TOM KEIFER succeeds in proving (once again) to be an artist who knows no creative boundaries and remains in a league of his own.”

In touring news, TOM KEIFER and #keiferband have been on a vigorous trek ever since the 2013 release of his debut solo album, and they’re not slowing down anytime soon. Their current headlining tour began July 30 in Nashville, TN and continues through the end of 2019, with more shows being added in the coming weeks and already being planned for 2020.