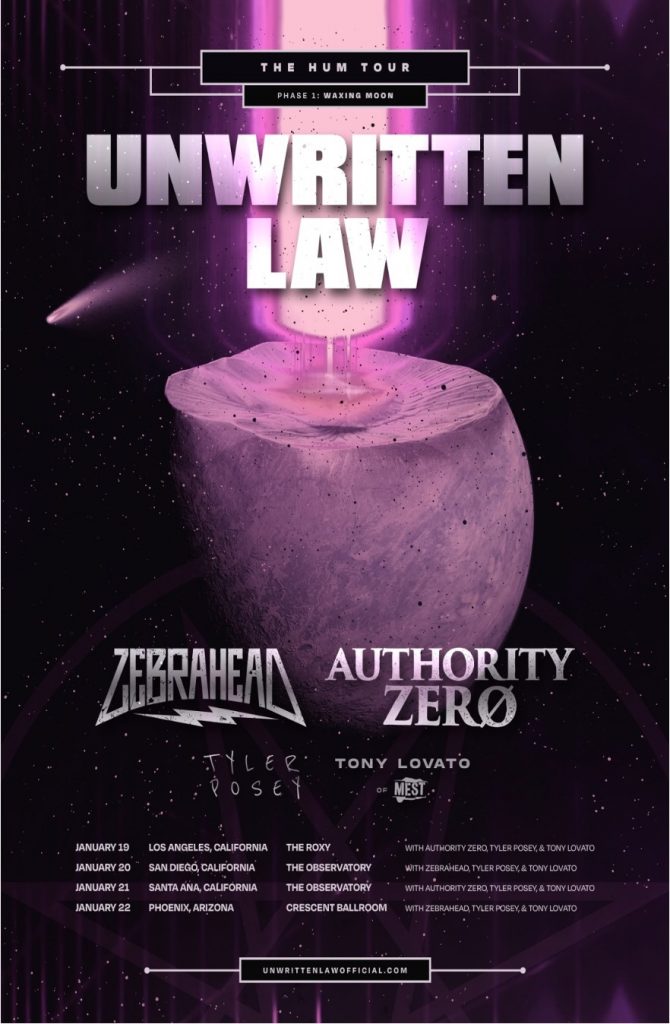 ANNOUNCE 2023 HEADLINING TOUR WITH SUPPORT FROM AUTHORITY ZERO AND ZEBRAHEAD

October 25th, 2022 (San Diego, CA) – Today, SoCal punk legends Unwritten Law share the short film music videos for “Magnetic” and “The Hum,” off their recently released 10th studio album, The Hum. Directed by Joseph Russo, the short film follows the story of a couple, played by Tyler Posey and Tehya Elam, as they enter an alternate reality world known as The Hum. The two become obsessed with the lives they lead in this alternate reality and eventually sacrifice their real life for the fantasy life that will never come to be. The story begins with “Magnetic” and continues with “The Hum.”

Today, the band is also excited to announce The Hum headlining tour for 2023 with support from Authority Zero, Zebrahead, Tyler Posey and Tony Lovato of MEST. Beginning January 19th in Los Angeles, CA at The Roxy, the band will head out on a short run, stopping by in San Diego, CA and Santa Ana, CA before wrapping in Phoenix, AZ at the Crescent Ballroom on January 22nd. See below for more details.

Formed in 1989 in Poway, California, Unwritten Law has been operational in 5 different decades. With a history of lineup changes, this incarnation of the band has been steady since 2014.

Earlier this year, Unwritten Law made their triumphant return with their first new piece of music in over 10 years, their 7th studio album, The Hum. With almost a decade alongside brother and bassist Jonny Grill, founding drummer Wade Youman, and guitarists Chris Lewis and Scotty Mac, the band has never been stronger. With The Hum, the band has brought forth a conceptual work that rings loudly in today’s oversaturated music space. With the help of notable producer Joe Marlett (Blink-182, Queens of the Stone Age and Songs for the Deaf), the record highlights how the band’s distinctive sound and songwriting has matured over these years they’ve been away and further solidifies what made them a
household name among the ‘90s punk explosion.