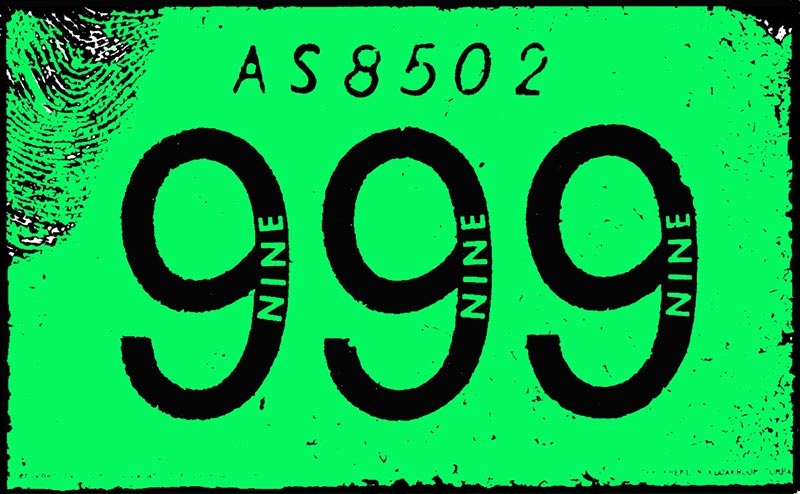 “Bish! Bash! Bosh! is about cooking up a storm with our music,” explains vocalist and guitarist Nick Cash of significant and essential English punk rock outfit 999. “There’s one thing that it has always been about in everything that we have ever done and that’s freedom, and of course dancing.” The band will release their first new studio album in over 13 years on April 24th via Cleopatra Records. The band unveiled their lead single “Crazy Tuesday World” via Brooklyn Vegan earlier today. “The verses are actual quotes/words from people that hear voices in their head,” describes Cash. Also, limited edition green vinyl is now available.

Bish! Bash! Bosh! is a testament to the band’s legacy. It includes 15 original songs that crackle with energy, verve and inspired songwriting. From people that hear voices in their head (“Crazy Tuesday World”) to paranoia surrounding guns and shooting people (“Shoot”) to frustration with the modern world (“I Hate It All”) to PTSD (“My Dad Trashed My Submarine”) to getting your head out of the sand and accepting the need for change (“Don’t Want To Know”) – 999 examines real life problems within society.

Named after the United Kingdom’s emergency telephone number, 999 was founded in London during 1976 by Nick Cash and Guy Days. They released 14 singles and 12 studio albums between 1978 and 2007. Between 1978 and 1981 five of their singles landed in the Top 75 on the UK Singles Chart. Their internationally known and iconic punk rock anthem “Homicide” ended up breaking the Top 40. In addition, it has been featured on numerous soundtracks including Shameless, Grand Theft Auto IV, The Killing of America, and Too Old to Die Young. As a result of extensive touring in the United States in the early ‘80s, the band’s third and fourth studio albums The Biggest Prize In Sport and Concrete charted on the Billboard 200. To date, the bad has completed 17 U.S. tours, 54 UK tours, 37 European tours, and 137 gigs in London.

999 is Nick Cash (vocals, guitar), Guy Days (guitar), Arturo Bassick (bass), and Stoo Meadows (drums).  Their new album Bish! Bash! Bosh! will be released on April 24th via Cleopatra Records. The band plans to tour quite a bit throughout North America and Europe after the current infectious pandemic is over.