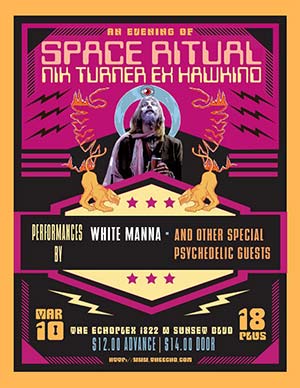 Los Angeles, CA – Much to the anticipation of west coast Prog/Psych music fans, legendary Hawkwind member Nik Turner will be performing at the Echoplex in Los Angeles on March 10, 2013. Making this event even more historic, Nik Turner and his band will be performing Hawkind’s famed ‘Space Ritual’ album in its entirety live! Nik Turner was a founding member of Hawkwind during what has been considered their most commercially successful and critically acclaimed period for the band from 1970 to 1976. He wrote/co-wrote some of the group’s most popular songs such as “Brainstorm” and “Master Of The Universe”. Hawkwind’s 4th and possibly most popular album ‘The Space Ritual Alive in Liverpool and London’ was recorded in 1972 (released in May 1973). Reaching #9 in the UK album charts and #179 in the Billboard Top 200, the double-record was recorded during the tour to promote the band’s ‘Doremi Fasol Latido’ (third) release. The Space Ritual show attempted to create a full audio-visual experience. The performances featured dancers, lightshow by Liquid Len and poetry recitations by Robert Calvert. Now Nik Turner brings the historic show to the US shores, recreating the magic once again!

“I’m really excited to bring Space Ritual back to America after all these years and to bring the excitement, madness and four-dimensional experience to the fans. The show will create the astrological sounds, colors, experimentations, dimensions and innovations from the original Space Ritual days of the early ’70s for today’s audiences.” – Nik Turner

Space Ritual was formed 2001AD, coalescing through time and space by populace demand, and psychic desire and need, to revive the lost magic, the true original spirit of ‘Hawkwind’, of which the band were all part, and ‘keepers of the flame’. The band plays modern space, rock, jazzy, science, fictional, fantasy, spiritual music, to heal and raise spirits, consciousness and awareness, promoting communication and good times, getting high without drugs, using multimedia sound/light/visual imagery to create extremely wild, wacky, mind boggling/blowing experience, each performance truly a happening!

Nik Turner will be fronting the show on vocals, flute and sax, and will be joined by his backing band: Jurgen Engler, founder of German band Die Krupps on guitar, audio generator , synthesizer ; Nicky Garrett, founder of the UK Subs, on guitar; and Geoff Miles, of the 1970’s punk band Chelsea, on bass;Jason Willer on drums from UK Subs/ Alaric/ Cross Stitched Eyes. Eccentric, innovative and enigmatic, Nik Turner is full of surprises! Other artists to perform include White Manna and other special psychedelic guests!