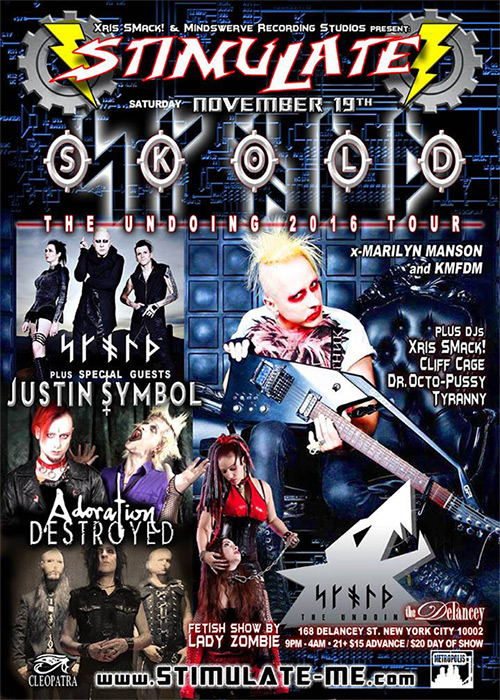 SKOLD
Tim Sköld is a Swedish multi-instrumentalist who, in addition to producing solo work, has also collaborated with many musical groups including Shotgun Messiah, KMFDM, Marilyn Manson and Motionless in White.

“Skold”, was released in 1996 by record label RCA (and co-produced with Scott Humphrey)

Sköld joined KMFDM in 1997 for the album “Symbols” and again in 1999 for the album “Adios” where he took on a bigger role in the band not just as vocalist, writer and bassist, but also as a producer, engineer and programmer. He was also a member of MDFMK. Due to Tim’s commitment as producer for Marilyn Manson’s 2003 album, The Golden Age of Grotesque, he was not able to feature in the line-up for KMFDM’s 2002 Sturm & Drang tour

Sköld’s involvement with Marilyn Manson began in 2001 as producer for the single “Tainted Love”, (featured in Not Another Teen Movie and soundtrack). Manson and Sköld went on to also score the movie Resident Evil, released in 2002.
in 2002 not only was Sköld the bassist for the band, but he was also producing, editing, creating artwork, electronics, programming. drums and beats, playing guitar, keyboards, accordion and synthesizer bass for the album “The Golden Age of Grotesque”.
On the band’s 2004 release, “Lest We Forget” Sköld produced, played lead guitar, and sang backup vocals on the cover version of “Personal Jesus”, which was also released as a single.
2007 saw the start of work on Marilyn Manson’s sixth studio album “Eat Me, Drink Me”. Sköld played guitar on the band’s 2007 world tour, Rape of the World.

Sköld, also joined ohGr, a project of Skinny Puppy vocalist Nivek Ogre, for the tour in support of its first album, Welt, in 2001.

JUSTIN SYMBOL
With the release of debut album ‘V ? I D H E A D’ on Halloween 2014, electro-shock-rocker and self-proclaimed “King of Negativity” Justin Symbol emerged as a bold new force in the national rock scene. ‘V ? I D H E A D’ features co-founding Marilyn Manson guitarist Daisy Berkowitz and was accompanied by a U.S. tour in May 2015 with William Control and Requiem. This buzz helped Symbol gain the attention of major music press and build a national cult following.To celebrate the one year anniversary of ‘V ? I D H E A D’, Symbol ?and his band embarked on a second U.S. tour with Victory Records artist The Bunny The Bear and Vanity Strikes in November 2015! Symbol is currently in the studio with the band, working on their second full length album, ‘G ? D H E A D’, due in early 2017.

ADORATION DESTROYED
With one eyeliner-stained eye looking back over a black-clad shoulder, Adoration Destroyed has arrived with a sound that simultaneously harkens back to the dark electronic music of the past, seductively merged with bleeding-edge production culled from modern EDM.

Get the new Adoration Destroyed Album!

The brand new album from Adoration Destroyed, a goth-industrial outfit whose sound simultaneously harkens back to the dark electronic music of the past, seductively merged with bleeding-edge production culled from modern EDM!